No-fuss, hands-off Date Cinnamon Rolls with Bourbon Cream Cheese Icing. Turn plump dates into a paste and spread it on cardamom-scented dough before baking and being slathered in spoon-licking bourbon cream cheese glaze.

This adaptable, freezer-friendly cinnamon roll recipe is pretty much the only way to go when it comes to fresh-from-the-oven pastries.

Want warm cinnamon rolls in the morning, but don't want to babysit rising dough? Then this is the plan for you.

You will love the twist on these cinnamon rolls. They are filled with naturally sweetened blende date paste.

These helpful items will assist you in making the best cinnamon rolls ever!

Turn gorgeously plump dates into a naturally sweet and totally gooey filling for these otherwise traditional cinnamon rolls. The dates blend down into a paste and spread so nicely over my cardamom-scented dough.

Once baked, slather the cinnamon rolls with a Bourbon Cream Cheese Frosting that is literally to die for!

Bourbon - Not into booze on your brunch items? Skip it all together and thin the icing with milk of choice

How to Bake with Yeast

Types of Yeast for Baking

The thing about making cinnamon rolls from home, and I’m not talking about the kind that you break free of a cardboard tube, is the that waiting and timing can be frustrating.

Thankfully, with proper planning, your dreams of eating sticky, swirly buns in your pj’s can be fulfilled.

By placing the dough in the refrigerator to rise, you are essentially hitting “pause” in the process. The cool temps in the fridge dramatically slow down the yeast, so the dough continues to rise but at a much slower rate.

Instead of scheduling 1 to 2 hours between steps, you can pop the dough into the fridge for 8 hours (or overnight) and continue on with your day.

How to Freeze Unbaked Cinnamon Rolls

After the second rise (once they are filled and sliced), place the buns individually on a baking sheet and freeze until firm.  From there, you can place them in a freezer bag.

Freezing them individually first means that they don’t stick together and you can bake them off (from frozen) one or two at a time.

Alternatively, you can freeze them together in a disposable aluminum pan. However, the buns will need to come back to room temperature before being baked off.

To do so, let them thaw in the fridge overnight and come to room temp as the oven pre-heats in the morning.

Please leave a star review if you loved this recipe! Make sure to share your recipes and tag me on Instagram @stylesweetdaily.

I was inspired by Cynthia’s date-filled buns for this recipe. 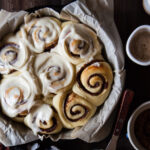