Start these eggnog and nutmeg-spiced cinnamon rolls with toasted pecan filling the night before and add the orange-vanilla bean glaze just in time for Christmas brunch!

Over the last few years, I've become a much more well versed in yeast-risen baked goods.  After experimenting with recipes like Lemon Brioche Pull-Apart Bread and Date Bourbon Buns, I better understand the simplicity of working with yeast and just how amazing homemade breakfast pastries taste still warm out of the oven.

Bonus points if you get to eat them still in your matching Chirstmas pj's.

Why This Recipe Works

One thing in particular that I've truly embraced with these types of recipes is the timing.

Want warm, gooey, sticky Eggnog Cinnamon Rolls come Christmas morning without having to wake up at 3am?  Start the dough the night before and make time on you side instead of impatiently waiting between rises.

By placing the dough in the refrigerator to rise, you are essentially hitting “pause” in the process.  The cool temps in the fridge dramatically slow down the yeast, so the dough continues to rise but at a much slower pace.

Instead of scheduling 1 to 2 hours between steps, you can pop the dough into the refrigerator for 8 hours (or overnight) and continue on with your day/night, whether that be Christmas Eve or any other time of the year.

These Overnight Eggnog Cinnamon Rolls bake up beautifully in a French oven or cast iron skillet.  I find that they distribute heat very evenly and efficiently, creating perfectly risen buns with toasted edges and gooey centers.

The puffy, pillowy dough is similar to a brioche dough and is loaded with lots of butter.  I've used eggnog as my liquid here, but you may use any type of milk in its place.

The eggnog flavors are quite subtle, so I like to add a pinch of nutmeg into the dough as well.  For a bit of crunch and texture, toasted pecans have been chopped and added to the cinnamon roll filling.

This cream cheese glaze has been my go-to accessory lately (you'll see it again on a couple more cake recipes coming up soon), so I decided to change it up by adding fresh orange juice, zest, and vanilla bean.  The bright yet subtle citrus notes pair perfectly with the nutmeg and cinnamon and nearly everything is better with a little vanilla bean.  Perfect along side a warm cup coffee and lots of Christmas cheer. 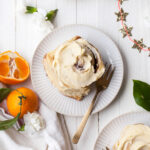 Thank you to Le Creuset Canada for their participation in this post. Words and opinions are my own.