Standing 6-layers tall, this Blackberry Lavender Cake is the perfect balance between sweet, tart, and floral flavors. Infusing aromatic, crushed lavender into the batter elevates this basic butter cake without making it taste too perfume-y or soapy. Painted with lilac and lavender shades of silky Swiss meringue buttercream, this cake is perfect for any spring or summer celebration.

Don’t be intimidated by the height of this cake. Instead, think of the 6 layers as just three cakes, split into two layers each. That is, in fact, all that is being done here.

When working with something as sweet and thin as a jam filling, it is difficult to build layer cakes the same as their buttercream-filled counterparts. J

am and buttercream fillings vary so much, so it only makes sense to give them different treatments.

For buttercream, fudge, and cream cheese, the filling is half the height of the cake layers. So, if my cakes layers are 1-inch tall each, I add about ½-inch of filling between each layer.

A ½-inch layer of something like jam or rich chocolate ganache can be overpowering. Instead, thinner layers (and more of them) help balance out the overall texture and flavor of the cake.

Especially in a cake where the baked layers are rather thick, like in this recipe, splitting the layers in half and dispersing the jam between them makes for a better cake.

How to Stack and Fill a Layer Cake

Worried that a cake this tall might tower over? A buttercream “dam” helps hold in the loose filling and keeps it from slipping out between the layers.

The dam also helps secure the layers together as you build the cakes.

A crumb coat not only locks in crumbs, but it glues the cake together the keep the layers from slipping and sliding as you go to ice the cake.

To create a buttercream dam, fill a piping bag with a medium round tip, or a cut bag with an opening of about a ½-inch, with the same buttercream or frosting that will be used on the outside of the cake.

When you go to build your cake, pipe a ring around the top edge of each layer of cake.

Fill this ring with looser fillings like jam, pastry cream, or ganache. Place the next layer of cake on top and repeat.

To crumb coat the cake, spread a thin layer of buttercream all over the stacked and filled cake. This layer of icing doesn’t have to be perfect.

The idea is to lock in any loose crumbs and prevent them from mixing into the final coat of frosting. Chill the crumb-coated cake for about 15 minutes before adding the outer layer of frosting.

This recipe comes from the new book, Blooms and Baking, by Amy Ho. Amy is a local friend on my mine and the editor behind the Saveur-nominated baking blog, Constellation Inspiration. Her romantic bakes and flower-covered cakes that grace her website can now be found in her beautifully photographed book.

For the frosting, use a ½ batch of this Swiss Meringue Buttercream. 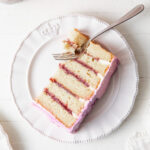