Do you literally dream of warm, gooey cinnamon rolls at night? With this recipe you can make these dreams come true and eat fresh-out-of-the-oven Overnight Pumpkin Cinnamon Rolls in your pajamas without having to wake at dawn!

The Overnight Pumpkin Cinnamon Rolls have everything you crave on a chilly, fall morning. The soft yet slightly chewy buns are enriched with pure pumpkin and ooze that classic cinnamon filling.

With hints of cardamom, cinnamon, and ginger, the glaze pairs perfectly with pumpkin and a cozy set of pajamas.

Here is a quick glance at some of the ingredients needed beyond basic pantry staples. Find a complete list with quantities in the full recipe to follow.

These are the primary tools you will need to bake these cinnamon rolls:

Why we love an overnight cinnamon roll recipe:

Yeasted baked goods are synonymous with lazy weekends, but in order to enjoy a warm bun in your pajamas you’d have to wake at dawn to get started! Sure you could throw on some boots and a coat over your yoga pants and pick up something from your local bakery, but it’s so easy to make fresh cinnamon rolls at home without all the trouble.

Like most yeasted doughs, cinnamon rolls require two rises - one before shaping and one after.

Each proofing session can take up to two hours at room temperature (so if you want to be eating these along side your first sip of coffee, you’d have to set your alarm for like 4:30am. Unless you have a plane to catch, why would you want to do that to yourself?).

How to Proof Yeast While You Sleep

Cool temperatures slow down yeast production. Okay, great - but aren’t we trying to get things moving faster and straight on to delicious town? Yes, but when you allow the long rise to happen while you are sleeping, it feels like the process is actually sped up.

Making the dough before bed and letting it rise overnight means we can get right to filling and shaping in the morning.

Alternatively, you can save the big chill for the second rise. Allow the dough to double at room temperature (about 2 hours), roll out, fill and shape the night before.

Place the shaped rolls on a baking sheet, cover, and place in the fridge overnight. Come morning, pull the rolls out so they can come to room temperature while the oven pre-heats.

If you don’t want to do an overnight rise, allow the dough to proof at room temperature for about 2 hours, or until it doubles in size.

To cut the cinnamon rolls, use a sharp serrated knife or unflavored dental floss. To use floss, take a long strand and slide it under the log, cross-wise. Pull the ends up and cross them on the top of the log. Continue to pull the ends in opposite directions until the floss cuts through the dough.

The best way to prevent over-baking is to use a probe thermometer. If you don’t have one, gently tug on the center of the spiral of one of the buns with a paring knife. If it comes up rather dough and raw, then they need more baking time. If it is dry and stuck in there, then they are probably a little over-done.

We like our pumpkin cinnamon rolls served warm. You can easily reheat in the microwave for 10 to 15 seconds at a time.

Store leftover pumpkin cinnamon rolls covered in plastic wrap in the refrigerator for up to a few days. They are best served the day that they are baked. 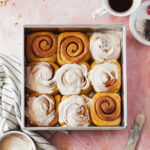 If you don’t want to do an overnight rise, allow the dough to proof at room temperature for about 2 hours, or until it doubles in size.
« How To Make Pie Dough by Hand
Caramel Apple Spice Cake »