These ice cream sandwiches are made with chewy, not cakey, pumpkin snickerdoodles. Rolled in pumpkin pie spiced sugar, the wonderful mix of textures from the crunchy coating, chewy cookies, and cold ice cream make the perfect fall dessert.

Even as the temperatures drop, this frozen treat is full of cozy flavors - best enjoyed in your favorite flannel.

What are Pumpkin Snickerdoodles?

Snickerdoodles are a type of cookie that is rolled in cinnamon sugar before baking. You will recognize them by their signature crackle surfaces and glittery sugar finish.

They can be soft and pillowy or soft and chewy in the center.

Chewier, flatter versions of these cookies create the best texture after being frozen and are ideal for when making ice cream sandwiches, like these.

Cream of tartar is critical for achieving traditional snickerdoodle taste and texture. It is responsible for giving them their slightly tangy flavor.

All your baking pantry staples (plus a couple extras) can be found in snickerdoodles. Butter, sugar, eggs, vanilla, all-purpose flour, baking soda, salt, cream of tartar, and cinnamon.

Butter - Partially melted butter prevents too much air from being added when mixed with the sugar. Unlike a cake where you might rely on the creaming method to aerate the batter, keeping the fat (butter) soft here helps prevents the cookies from baking up with a cakey texture.

Brown Sugar - A bit of brown sugar adds depth of flavor and notes of butterscotch. The acidity also helps react with the baking soda to leaven the cookies.

Cream of Tartar - Cream of tartar give snickerdoodle their distinctive tang and keeps cookies soft.

Cinnamon - Before the cookie dough is baked off, they are rolled in a mixture of cinnamon and sugar. Or in this case, sugar and pumpkin pie spice!

Vanilla Ice Cream - You will need ice cream to make these into sandwiches. Your favorite tub of store-bought ice cream will work just fine in this recipe.

These are the primary tools you will need to make these cookie sandwiches:

How to Make Pumpkin Snickerdoodles

To make pumpkin snickerdoodles, bake the cookies using only an egg yolk instead of the whole egg. The pumpkin puree will essentially replace the liquid from the egg white, but keeps the richness and fat of the yolk.

Instead of just cinnamon and sugar, roll pumpkin snickerdoodles in a mixture of pumpkin pie spice before being baked.

Can Snickerdoodles be Frozen?

These pumpkin snickerdoodle can absolutely be frozen! Their chewy texture freezes up beautifully and can be eaten straight from the freezer (ideally with ice cream in between, of course).

While some snickerdoodles are nice and puffy, these thinner with centers that remain soft even after cooling.

How to Make Ice Cream Sandwiches

You can certainly make your own ice cream to use as the filling, but store-bought is perfectly acceptable here. Vanilla works really well with the pumpkin snickerdoodles, but I have no doubts that my Dulce de Leche ice cream would be absolutely amazing as well.

To make (nearly) mess-free ice cream sandwiches, assemble and freeze before serving. You could of course add a scoop of ice cream between two cookies and eat immediately, but let me teach you the best was to make an ice cream sandwich that lasts.

To make the sandwiches, cut out disks of frozen ice cream using a round biscuit cutter that is slightly smaller than the cookies.

Place the disk of ice cream between two cookies then set on a baking sheet or cutting board. Freeze the sandwiches until ready to serve.

These ice cream sandwiches can be made in advance and store well in the freezer. If not ready to assemble, the plain cookies may be stored in the freezer in a hefty zip-top bag. 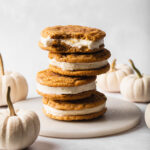