Like the traditional English dessert, this layered version of a sticky toffee pudding cake is soaked in warm toffee sauce. The layers are sweetened with plump dates and frosted in a caramelized white chocolate buttercream.

The cake layers are filled with moist, sweet dates that are soaked with warm toffee sauce in this sticky toffee pudding layer cake.

Traditionally served as squares, this riff is layered with caramelized white chocolate buttercream and topped with even more toffee.

You will love all the cozy flavors of this cake. It is packed with brown sugar, toffee, and caramel notes in roasted white chocolate buttercream.

When poured over a brown sugar cake, warm toffee soaks into the cake layers making them extremely moist and even butterier.

The natural, earthy sweetness of the dates combines beautiful with all the warm flavours and molasses from the brown sugar.

Here is a quick glance at some of the ingredients needed beyond basic pantry staples. Find a complete list with quantities in the full recipe to follow.

These are the primary tools you will need to bake this cake:

Caramel vs Toffee vs Butterscotch

Caramel, toffee, butterscotch - we love it all!  But, have ever taken a moment to think about the difference between caramel and butterscotch and toffee?  Let's take a closer look....

In general, caramel refers to cooked sugar. In fact, you can make caramel in its purest form by simply boiling plain sugar on the stovetop. To make caramel sauce, cream and sometimes a small amount of butter is added to granulated white sugar that has cooked to a medium-amber color.

For butterscotch, use brown sugar. And as the name would indicate, a lot of the flavor comes from, you guessed it - Butter!

Add cream to the melted butter and brown sugar to turn it into a sauce. Then, everything returns back to the stove and cooked together until the sauce thickens.

Toffee vs. Butterscotch.  This is where things might get confusing.

They use pretty much the same ingredients. However, if you bring the brown sugar + butter mixture to the hard crack stage, then it will turn into toffee candy as it cools.

So then what is toffee sauce?  Isn't it just the same as butterscotch sauce?  Well, basically yes.

How to Make a Drip Cake

How to Stack and Fill a Cake

How to Ice a Cake

How to Make Beautiful Layer Cakes

Buy my books! Layered and Icing on the Cake 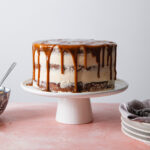 « How to Ice a Cake
Pumpkin Pot De Creme »