Cake for breakfast, anyone?   I've turned a tasty breakfast cereal into a brunch-time treat!

Using a standard praline base of sugar, water, and cream of tartar, I cooked it all up until golden before quickly stirring in the cereal and spreading it to cool.

On its own, the Cinnamon Toast Crunch praline is pretty delicious and could be used as a garnish on your cake.  But to turn it into a buttercream, the praline needs to be ground down in a food processor until it is nearly a powder.

The caramelized sugar can be quite hard, so you will need to make sure to grind, grind, grind to keep your guests' teeth from chipping. Who knew a boxed cereal could be transformed into something to really celebrate with?!? 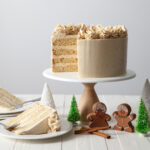 This post was sponsored by Life Made Delicious. Thoughts and words are all my own. Thank you for supporting the brands that make Style Sweet CA possible.