Why You'll Love this Nutella Cake

The brownie layers are chewy while the cake layers are super moist. Nutella is folded into Swiss meringue buttercream.

It might sound like a lot of chocolate, but the buttercream is still surprisingly silky and much lighter than a heavy fudge frosting. The slightly tartness from the raspberries helps to balance out all of the flavors.

What is a Brownie Cake?

A brownie cake is rich and fudgy. It falls slightly under the crackle top. A bit denser than regular cake, a brownie cake is baked in a round pan and layered with frosting.

Since it needs to be able to be stacked, the brownie cake layers are a little dense (in the best way) and less gooey.

Ingredients at a Glance:

Here are the ingredients you will need beyond basic pantry staples:

Buttermilk - the perfect balance of acidity and fat to keep the chocolate cake tender.

Eggs - for binding. Whisk them together with the sugar for a brownie with a crackle top.

Nutella - a spread made from ground hazelnuts and chocolate. When added to buttercream, it is rich and silky.

Unsweetened Cocoa Powder - pick one that has been Dutch-processed. Cocoa powder adds depth to the recipes.

Raspberry Jam - a thin, sweet layer adds tartness to break up all the chocolate layers.

This is one tall cake! It can be served and stored at room temperature for 24 hours (so long as it is not too hot).

Store leftovers wrapped in plastic in the refrigerator for up to 4 days.

If the buttercream gets too soft, then I recommend placing the cake in the refrigerator before slicing. Since the brownie layers are more dense than the cake and fillings, you will be met with some resistance when slicing.

Carefully slice the cake with a large, sharp knife. Apply a bit more pressure to cut through the brownie layers, but not so much that the other layers squish.

For more chocolate drip tips, please click here. Note that I did not pour the glaze into the center of the cake. 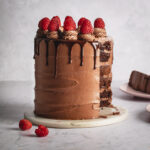 For the Brownie Cake

For the Chocolate Cake

For the Nutella Buttercream

For the Chocolate Glaze

To Make the Brownie Cake

To Make the Chocolate Cake

To Make the Nutella Buttercream

To Make the Chocolate Glaze