This super tender Pear Caramel Cake is filled and frosted with a caramel-like Dulce de Leche Buttercream and bits of oat crumble.

I adapted this Pear Caramel Cake from my book Layered, which is in stores now! The shredded pears nearly melt into the cake and keep it incredibly soft and tender.

Adding Dulce de Leche to homemade buttercream is so luxurious.  Similar to caramel, the dulce de leche adds a deeper, but not-as-sweet creaminess to the frosting.  Making dulce de leche from a can of sweetened condensed milk is super simple, but you may also try a store-bought variety.

For an additional layer of texture, I added an Oat Crumble in the middle.  The cake is so moist and the buttercream is so silky; I really feel like this cake benefits from a bit of crunch.  The oat crumble recipe will certainly make more than you need. I encourage you to sprinkle leftovers over yogurt or roasted fruit!

Serve at your next afternoon gettogether with friends and family with a side of coffee or tea! Perhaps even have a slice after dinner.

Looking for another yummy pear dessert, but not much of a cake person? Try our Pear Pie with Butterscotch! 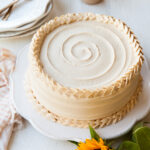