Hey Guys!  Only two more days of my first Back to Basics series!  I hope you’ve been enjoying the lessons so far.  What have your favorite points been so far?  Earlier this week I talked all about Layer Cakes.  If you couldn’t tell already, my love for layer cakes runs pretty deep.  I got so carried away with my post that I decided to separate the recipe for this Red Velvet Cake with cream cheese frosting and let it have its own spotlight (it’s that good!).  Tomorrow I will be announcing the giveaway winner, so make sure to tune in. Jump down to the bottom of this post to enter!

In my research for Layered, I found all sorts of interesting tidbits about classic layer cakes, including Red Velvet Cake.  For example, this widely considered southern dessert was actually first served at the Waldorf Astoria Hotel in NYC!  It was originally paired with a cooked-flour frosting or “Heritage” icing, but today you’ll most likely find the bright red layers slathered in whipped cream cheese frosting (like with this recipe).  Who would have thought, right?

Black Forest Cake – Germany; 1915:  layers of kirsch-soaked chocolate cake slathered in whipped cream and stuffed with cherries from the Black Forest region in Germany that is known for producing the cherry liqueur.

Brooklyn Blackout – Brooklyn, NY: layers of chocolate cake filled and frosting with chocolate custard and topped with cake crumbles.  It was named after the World War 2 blackout drills and was made famous by Ebinger’s Bakery (1898 to 1972).

Hummingbird Cake – Jamaica, 1979: this southern classic actually dates back to Jamaica.  Named after the Jamaican nation fowl or “doctor bird,” it is a pineapple-banana cake with either pecans or walnuts and smothered in cream cheese icing.

Pretty interesting, right?  Or at least is it to me.  I could go on, but let’s get back to the Red Velvet.  I feel like people are very divided over red velvet cake.  Either you love it or hate it.  Years ago, you probably would have found me closer to hate.  Honestly, I just didn't understand the appeal.  Artificially dyed cake slathered in sickly sweet frosting?  No thanks.  Overtime, I had so many clients request the classic at my bakery that I ended up giving in and became determined to create a red velvet that I could be confident in.

Take the color out of the equation, and it is a delicious buttermilk cake with a hint of cocoa and whipped cream cheese.  Okay, now we are getting places.  Naturally, there is a bit of a red hue when the acidic properties in natural cocoa powder reacts with the vinegar and buttermilk. The velvet part?  This refers to the texture of the moist and tight crumb of the cake.  You can certainly still make this cake without the food coloring or use a natural substitute, like beet! 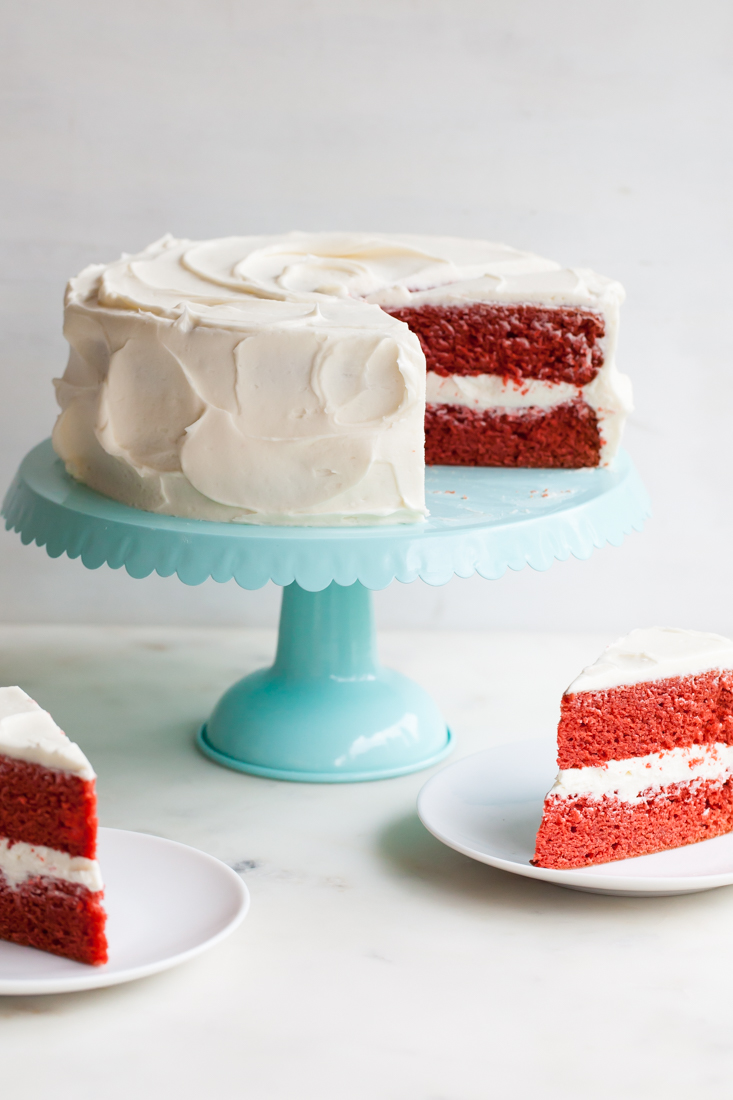 Pre-heat oven to 350 degrees.  Grease and flour two 8-inch round cake pans and set aside.

Sift together the dry ingredients and set aside.

In the bowl of an electric mixer, cream together the butter and sugar until light and fluffy.  With the mixer on low, add in the cocoa, vanilla, red coloring, and eggs – one at a time.  Stop the mixer and scrape down the bowl.

Divide the batter between the two pans and bake for 25 to 30 minutes or until a toothpick inserted into the center of the cakes comes out clean.

Cool on a wire rack for 10 to 15 minutes before removing the cakes from their pans.

Using an electric mixer, beat the cream cheese and butter together until smooth.  With the mixer on low, mix in the remaining ingredients until just combined.  Once incorporated, turn up the mixer to medium-high and beat until fluffy.  Adjust the sugar and milk until your desired consistency in achieved.

Once the cakes are completely cool, place the bottom layer on a cake plate or serving.  Spread about 1 cup of frosting on top.  Invert the second cake and place upside on top of the frosting.  Crumb coat the cake then fully frost.  Serve at room temperature.