The Earl Grey buttercream that surrounds this stunning layer cake is as creamy and delicious as its drink namesake - the London Fog latte.  Layers of classic chocolate cake are filled with this tea and vanilla-flecked frosting before being drizzled with salted caramel sauce.

To my surprise, this London Fog Cake turned out to be the number one fan-favorite cake from my cookbook, Layered. And while a traditional London Fog is heavy on the milk and vanilla side of things, I am thrilled that my combination involving classic chocolate cake turned out to such a winner.

A London Fog tea is essentially an Earl Grey tea latte sweetened with vanilla syrup. Here, I’ve infused the butter for the frosting with a generous dose of Earl Grey before whipping it up in my favorite Swiss meringue buttercream recipe. The loose tea flakes and vanilla bean seeds freckle the silky smooth buttercream.

The caramel drip far from traditional here, but I know you’ll forgive me once you taste all of these flavors together. And if you don’t trust me, then trust the readers - the love it too!

"Tea-flecked and silky smooth, Earl Grey buttercream is slathered between layers of classic chocolate cake before being blanketed over the entire thing.  The cake layers themselves are extremely moist and versatile – the quintessential cake to fulfill any chocolate craving.  To top it all off, homemade Salted Caramel Sauce!  Any recipe that calls for boiling sugar might sound a little scary, but it really isn’t as hard to make as you might think.  Several of the recipes throughout the book call for this staple recipe, and once you make your own, you’ll abandon the store-bought stuff for good.  Trust me, fudgy chocolate cake, creamy Earl Grey, and salted caramel – it doesn’t get much better than this!" 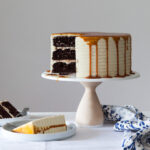