This lemon poppy seed raspberry cake is made with a light and zesty lemon cake freckled with poppy seeds. The moist cake is layered with sweet raspberry jam and creamy, luxurious French buttercream.

The lemon poppy seed cake is soft and fluffy. I like the added texture of the poppy seeds. Using both cake flour and buttermilk keep the layer tender. Cake flour has less protein than all-purpose flour while the acidity in the buttermilk imparts tang and tenderness.

For extra lemon flavor, I bet a lemon simple syrup to soak the cake layers would be nice. Instead, I opted for tart yet sweet seedless raspberry jam for an extra punch of flavor and color.

Where both Italian and Swiss meringue buttercream use egg whites, French buttercream is made with egg yolks. As you can imagine, the egg yolks make this buttercream rich and almost custard-like.

Once whipped, French buttercream is as silky as other meringue-based buttercreams. It glides effortlessly over cakes and has a melt-in-your-mouth quality.

New to making layer cakes? Be sure to review How to Ice a Cake. 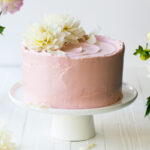 For the Lemon Poppy Seed Cake

For the French Buttercream

To Make the French Buttercream

To Assemble the Cake