Nine year ago exactly, I traveled to Tokyo for the first time.  It was November and we spent American Thanksgiving dining at the New York Grill up on the 52nd floor of the Park Hyatt Hotel (you know – the restaurant from Lost in Translation).  Besides this seemingly American meal (although absent of stuffing and canned cranberry sauce), I’ll remember that trip mostly for all the amazing and new foods I got to try.  In fact, it was this trip that first introduced me to the wonderful world of matcha!

Prior to my first trip to Asia, I had the privilege of traveling internationally to various parts of Europe, North America, and even Australia.  I’ve always loved exploring new cities, trying out new foods, seeking out cool desserts, and absorbing the different cultures.  Thousands of miles away from home, I was able to navigate around these other cities easily since most people still spoke English and I could sometimes even figure out dinner menus on my own.  But landing in Tokyo was much different.  The lights!  The crowds!  I could not make out not one word on the signs and it took us about 45 minutes just to leave the train station, but stepping out into Shibayu Crossing was one of the most exhilarating things I’ve ever experienced!

After a few days, afternoon tea in London and even grabbing a pint at a beer garden in Munich feels some-what familiar, but nothing compares to eating ramen in a tiny restaurant off of a random side-street of one of the busiest intersections in the world or being totally fascinated by the noodle-like substances that topped nearly all of the desserts in Tokyo.  As a first-time visitor, I found the city very hard to navigate.  It is not set up as a grid like a lot of other large cities and I could barely translate any street signs.  Around each corner held a new surprise!

I still have dreams about the best gyozo I ever ate in Harajuko.  I’ve been trying to find a taiyaki fish cake that tastes better than red bean paste-filled ones from the street cart near Shinjuku, but I haven’t yet.  And those noodle-like things on desserts?  Those were sweet chestnut-paste noodles!  Strangely enough, I even had my first Donut Plant donut in Tokyo.  But it was probably the tin of matcha powder that I took home to try out that made the biggest contribution to my culinary journey.

I can't jet back to Tokyo every time I need a matcha refill, and I expect that you can either.  Thankfully, I've teamed up with Aiya America for an awesome giveaway!  Enter to win some of their premium matcha tea powder AND a signed copy of my book, Layered.  Entry form below recipe. 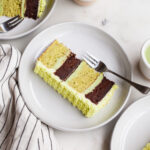 This giveaway is now closed.  Congrats to Maria Crystalia!

This post has been sponsored by Aiya America.  Thank you for supporting the brands that make Style Sweet CA possible!